Be A Patron Of The Next Record

We are pleased to announce that we have aligned with 3 time Grammy winning producer Larry Campbell for our next record. We will begin recording Aug 8th in upstate NY.

I first saw Larry playing with Bob Dylan in 1998. Every Dylan concert I attended I would watch the dark haired guitarist to his side. I fell in love with his style. I feel deeper in love in 2001 when one of my all time favorite Dylan records, "Love and Theft" , was released and featured Larry's guitar, mandolin and fiddle all over it. Sometime around 2006 I was sad when I noticed Larry was no longer playing alongside Dylan. Then, like some kind of joke by the music gods, Larry reappeared playing alongside my other music hero, Levon Helm. From 2007 until Levon's death in 2012 Larry played lead for Levon and produced his three Grammy winning records during what is known as Levon's "comeback years".

We have already begun preproduction and should have the record mixed and mastered by this fall. I am confident that this is my best material yet and will be in the care of one of the most talented musicians my genre has to offer.

Thank you for your continued support.  Please consider becoming a patron of the next record.  Together we can create beautiful things! 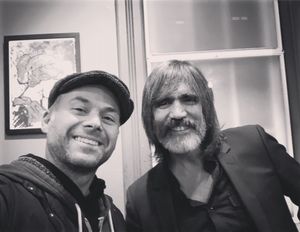